You are browsing the site archives by month.
26Jun 2018 The Newbury racecourse is regarded one of the most prestigious racing venues in the United Kingdom. It is located in Newbury, England. Being situated near the main rail line with its own stop a mile away from Newbury and just 60 miles from London, it is easily accessible to many people. The track is mainly used for flat races and jumps, with races held throughout the year. The flats season begin on 20th April. It hosts a total of 31 fixtures every year. Newbury racecourse was opened up officially in 26th September 1905, with its most notable races being Lockinge Stakes, Hennessy Gold Cup and Challow Novices’ Hurdle.

In the year 1805 was when the first recorded race took place in the racecourse. This meeting took place every year in Newbury, until 1811 when it changed its venue to Wood hay Heath. The racecourse stayed dormant for 90 years following a proposal by John Porter to set up a new racecourse at Newbury. After the proposal had failed, the Newbury Racecourse Company was formed in 1904, after which it bought land and began the construction of stables all summing up to a cost of 57,240 Euros. In 1906, a nine-day race meeting was planned. Six days were dedicated
to flat racing, while three days to National Hunt racing.

This year, the racecourse’s calendar is full of activities as it is set to hold a significant number of fixtures. Some of them have already taken place, for example the Be wiser Juvenile Handicap Hurdle, took place in 24th March 2018 where Oistrakh Noir emerged the winner. On the 19th of May will be the Al Shaqab Lockinge Day, with tickets going for 28.80 Euros for the premier enclosure and 20.80 Euros for the grandstand enclosure. This event entails a
wide range of outdoor and indoor activities, with lots of food and drinks. There is an ample parking space, with an individual parking space for each enclosure. Huntingdon racecourse is a horse racing track located in Huntingdon, Cambridgeshire, England. It is a thoroughbred track, well known for hosting National Hunt races. The racecourse is owned and managed by the Jockey Club Racecourses. It has been voted for a number of times as the best small racecourse in East Anglia and the South Midlands. Being located in a strategic place near where the A1 and A14 converge, the racecourse is convenient to many people, attracting huge crowds of people to its race meetings. It hosts a total of 17 fixtures each year, over a period of nine months. The most anticipated day in Huntingdon’s calendar is the Traditional Boxing Day meeting, which usually attracts thousands of people each year.

The racecourse has excellent hospitality facilities, making the stay of its visitors comfortable. The Peterborough restaurant is well known for its excellent dining services. Huntingdon provides free entertainment for children during Bank Holiday meetings that take place every Sunday. With the company of a paying adult, those under the age of 18 years are admitted free of charge. Adults aged 18 to 24 years can always register for discounted admissions into the racecourse.

The most notableraces held at Huntingdon are the Sidney Banks Memorial Novices’ Hurdle and the Peterborough chase. The Sidney Banks Memorial hurdle is for horses at the age of  four years and above. It is run over  3,947 metres, and takes place every February. The race was inaugurated in 1976. The Peterborough on the other hand is a grade 2 race run over 4,124 meters with the jumping of sixteen hurdles. It allows in competitors aged four years and above and takes place every December. It first took place in 1969.

Apart from being a horse racing venue, the racecourse is also a wedding, exhibitions, conference and car boot sales venue. This is mainly due to its convenient location and state-of-the-art facilities.

Born 11th April 1979, Desert Orchid was a much-loved horse that took part in various races. An English racehorse known affectionately as Dessie, it was long seen as an iconic part of the British horseracing scene. With a front-running and aggressive style, Dessie was loved by all who watched him ride. Known for his quality and determination as much as anything else, Dessie was a versatile horse who carried out an incredible range of feats on the track.

Across a stellar career, Desert Orchid enjoyed four different jump jockeys on its back: Colin Brown, Richard Linley, Simon Sherwood and Richard Dunwoody. Brian Rouse also had the pleasure of riding Dessie on its one and only flat race.

Arguably one of the greatest moments, though, came during the 1989 Victor Chandler Handicap Chase. Taking on four incredible rivals, Orchard fell and then managed to carry out an incredible comeback, defeating Panto Prince – the top-rated horse of the race, arguably – by a full head.

It also took part at the Cheltenham Gold Cup where it incredibly fought through terrible conditions and taking on a 3 mile course, as opposed to a 2 mile course. It came from back to defeat Yahoo in the late race stages, and it was cheered by thousands of fans at the end of the race. The race was voted the best ever by Racing Post fans, too! 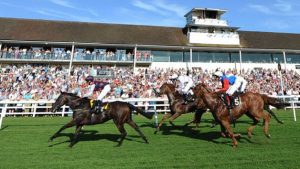